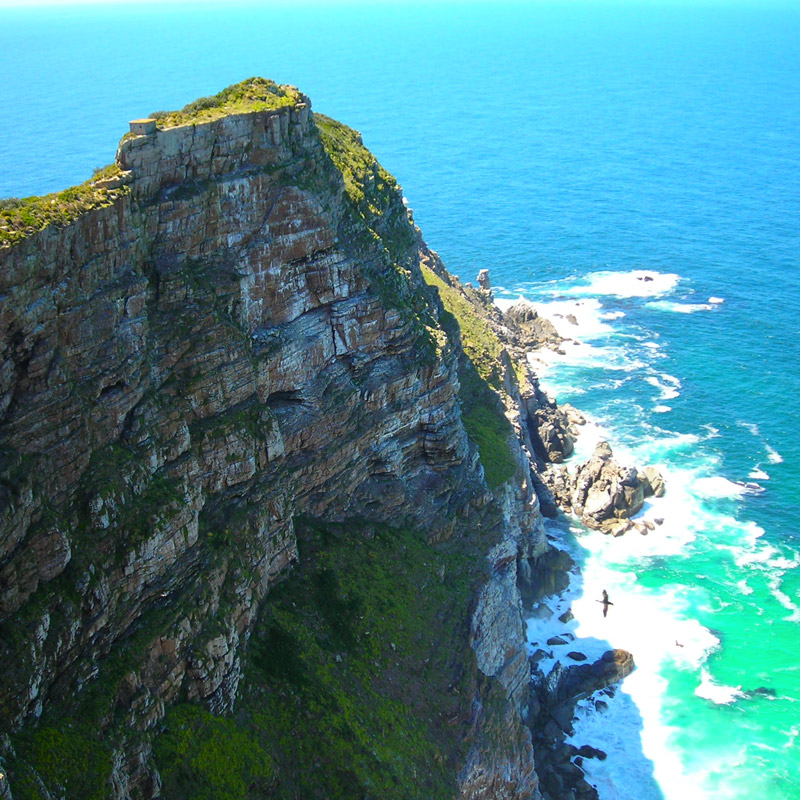 Take the funicular (own account) to the lighthouse to see the meeting of the Atlantic and Indian Oceans at the Cape Point.

The new lighthouse is at a lower elevation (87 meters; 285.5 feet above sea level), for two reasons: the old lighthouse, located at 34°21′14″S 18°29′25″E, could be seen ‘too early’ by ships rounding the point towards the east, causing them to approach too closely. Secondly, foggy conditions often prevail at the higher levels, making the older lighthouse invisible to shipping. On 18 April 1911, the Portuguese liner Lusitania was wrecked just south of Cape Point at 34°23′22″S 18°29′23″E on Bellows Rock for precisely this reason, prompting the relocation of the lighthouse.

The new lighthouse, located at 34°21′26″S 18°29′49″E, cannot be seen from the West until ships are at a safe distance to the South. The light of the new Cape Point lighthouse is the most powerful on the South African coast, with a range of 63 miles (101 km; 55 nmi) and an intensity of 10 megacandelas in each flash.

The peak above Cape Point is higher than that above the Cape of Good Hope. The rugged sandstone (Table Mountain sandstone) ridge that rises from Cape Point at sea level develops into two peaks. There is a major peak that dominates the skyline locally but there is also a smaller peak about 100 m (328 ft) further south. The higher peak has the old lighthouse on the top. The Flying Dutchman Funicular runs from a car park to the north up to slightly below the level of the old lighthouse and a short flight of steps leads to a viewing platform around the base of the lighthouse. From the end of the railway a second path leads to the lower peak.

Cape Point is often mistakenly claimed to be the place where the cold Benguela Current of the Atlantic Ocean and the warm Agulhas Current of the Indian ocean collide. In fact, the meeting point fluctuates along the southern and southwestern Cape coast, usually occurring between Cape Agulhas and Cape Point. The two intermingling currents help to create the micro-climate of Cape Town and its environs. Contrary to popular mythology, the meeting point of the currents produces no obvious visual effect; there is no “line in the ocean” where the sea changes colour or looks different in some way. There are, however, strong and dangerous swells, tides and localized currents around the point and in adjacent waters. These troubled seas have witnessed countless maritime disasters in the centuries since ships first sailed here.