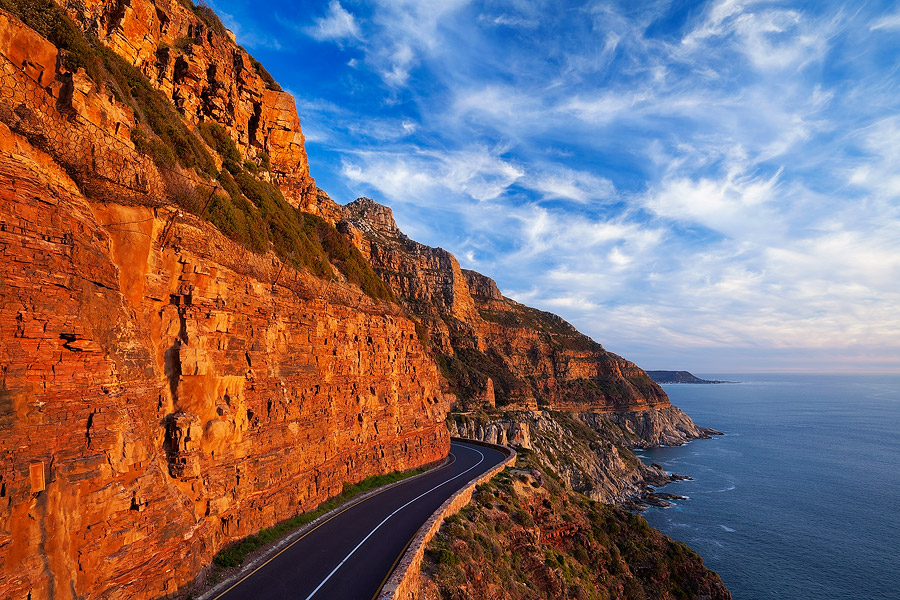 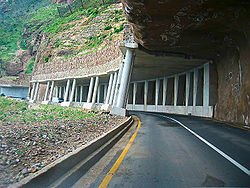 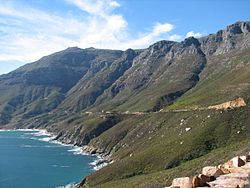 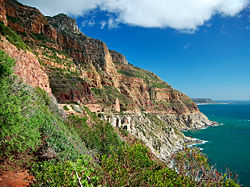 Chapman’s Peak is the name of a mountain on the western side of the Cape Peninsula, about 15 kilometres south of Cape Town, South Africa. It is opposite the inlet on which the town of Hout Bay is centred. The western flank of the mountain falls sharply for hundreds of metres into the Atlantic Ocean. A spectacular road, known as Chapman’s Peak Drive, hugs the near-vertical face of the mountain from Hout Bay to Noordhoek. Hacked out of the face of the mountain between 1915 and 1922, the road was at the time regarded as a major feat of engineering. Chapman’s Peak Drive was closed in the 1990s, after a rockfall caused a death and a subsequent lawsuit, and subsequently reopened after being re-engineered to protect motorists from falling rocks. It was reopened in 2005 as a toll road. The road was again closed for a number of months beginning on 19 June 2008 “as a result of risk areas identified on the mountain above the road”, but has since been reopened indefinitely. Chapman’s Peak Drive is part of the route of two of South Africa’s biggest mass-participation races, the Cape Argus Cycle Race and the Two Oceans Marathon.

The top of Chapman’s Peak consists of flat, sedimentary rocks related to those that form Table Mountain. The base of the mountain, however, consists of Cape Granite and the two formations meet at a geological unconformity that is world-famous amongst earth scientists.

Two different endangered vegetation types can be found along this road, and correspond to the two main geological formations. They are Peninsula Sandstone Fynbos and Cape Granite Fynbos and they are both endemic to the city of Cape Town, occurring nowhere else.

There is an old, abandoned manganese mine on the northwestern slopes of the peak. The remains of a jetty from which the ore used to be shipped is directly below the workings.